A 12-year Silicon Valley veteran,Turcotte’s professional technology career began in 1995 when he was recruited out of graduate school to manage executive marketing campaigns for computer industry pioneer Silicon Graphics Computer Systems (now SGI) after his marketing prowess was featured in Business Week magazine and twice on the front page of The Wall Street Journal.

In 1997, Turcotte moved to Sun Microsystems where for seven years he managed, and served as a liaison between, Sun’s third-party hardware and software developers in the media and entertainment industries and Sun’s sales, marketing and engineering teams.

Turcotte produced, co-wrote and directed the feature film, “No Pain, No Gain,” which was screened at the Sao Paulo Film Festival and Palm Beach Film Festival. The film had a limited theatrical release in the USA in 2005 and earned him a Best Director award at the Houston Film Festival.

Turcotte has also executive produced a retro pop music album “Baila: Shall We Dance?” with Jazz guitar virtuoso Terry Wollman which was distributed by Universal Music via Joan Jett’s Blackheart Music. Music from the album was licensed by CBS for “Walker, Texas Ranger,” “Martial Law” and “The Amazing Race.”

Turcotte is a veteran of the United States Air Force. During his service he earned a Meritorious Achievement Medal for his contribution to developing a interactive distance learning facility at the Air Force Institute of Technology at Wright-Patterson Air Force Base.

Turcotte earning a B.S. in Radio-TV-Film, a M.S. in Communication and an M.B.A. in Marketing at the University of Texas at Austin.

In his early days working in the Silicon Valley, Turcotte personally trained hundreds of Fortune 500 executives and government leaders how to use the Internet, including the CEOs of Boeing, Gillette and Price Waterhouse, as well as President George H. W. Bush. 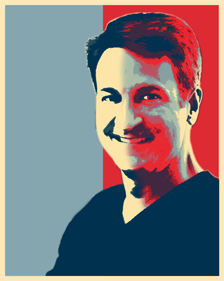